Carys Massarella, MD, FRCPC, is quite comfortable in front of the camera. The emergency room doctor at St. Joseph’s Healthcare Hamilton, hailed locally as a “trans-warrior physician,” has long been in demand for television interviews, TED Talks and documentaries. So when she was asked to figure prominently in a new documentary series called My Trans Journey, it was easy to say yes. 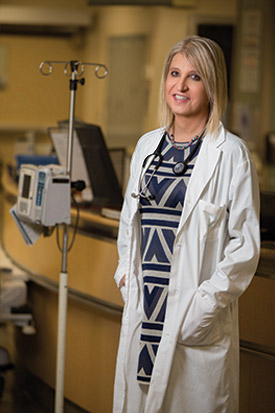 “It was sort of four different documentaries, about four different people and undergoing various, mostly surgical procedures and how they interact with the physician, which was me,” she says of the series now streaming on OUTtv. The show celebrates the lives of the transgender patients.

The TV appearances are among the many ways Dr. Massarella, who transitioned from male to female at age 42, raises awareness of transgender issues and the power of kindness and respect – which are foundational to her role as lead physician for the Transgender Care Program at Quest Community Health Centre in St. Catharines.

“I wish people could experience gender dysphoria for a day, but most people never will,” she says. “All I would ask of physicians is that have empathy for transgender people and understand who they are. Just know that they are trying to be themselves and support them in that identity.”

Dr. Massarella has been named one of the world’s 50 transgender icons by Huffington Post. She joined the St. Joe’s team in 1997 and has held various positions there, including chief of emergency medicine and president of the medical staff association. She is the first transgender head of a medical staff anywhere in the world.

The renowned clinician says the recognition of her work that comes with such achievements and appearances helps convey positive messages to others, especially parents of transgender children.

“It allows parents to sort of think to themselves, ‘yeah, being transgender isn’t the end of my kid’s life.’ Because a number of years ago when we first started doing this work, their perspective was often, ‘My child is transgender so their life is essentially finished for employment, for happiness and all those types of things.’”

Hearing her story and seeing her achievements, she says, shows parents that their children “can actually have a pretty decent life.”

Dr. Massarella joined the Quest Clinic in 2010, with the goal of providing non-pathologizing, high quality transgender health care in the Hamilton and Niagara region so patients did not have to travel to Toronto for care. At first, she was the only physician at Quest; it has since grown to include another physician, as well as a nurse practitioner, other nurses and therapists.

“We have cared for more than 1,000 transgender patients over the years,” she says of Quest’s popularity. Patients come from all over Ontario, pointing to a lack of access elsewhere.

But access is changing, and she welcomes the shift. “When I first started doing this work, almost no one in Hamilton was providing transgender care. Now there’s probably a good half dozen doctors who are doing a lot of transgender work in Hamilton, mostly at a primary care level, and also at McMaster Children’s Hospital.”

A need in medical education for transgender care

Such services will grow further, she says, when transgender care is more present in medical education.  “I think you need to teach it. And it does involve a lot of different specialties, not just primary care or endocrinology or pediatrics. Transgender patients will show up to your hospital for many different health care issues and they all deserve to be treated fairly and with dignity and respect.”

“I always say, ‘I don’t think anybody’s identity is an illness. It’s just who you are.’ So, to make that into an illness is incredibly harmful. It’s incredibly soul destroying and defeating. We did that for years and we had terrible outcomes with trans people. The whole goal of transgender care, for me, is to move away from that model. But we still see it all the time where people are referred to a psychiatrist as the first step in their transition process – and I think that’s just outright wrong.”

Still more needs to be done, she says, to ensure hospitals, medical clinics and doctors’ offices reflect the reality of transgender people’s lives – and respect the human rights code.

“In all provinces and at the federal level, gender identity and gender expression are protected human rights – which isn’t a cudgel. It’s not a threat. All it means is that just please, please, please treat transgender people with dignity and respect.”