Home > “The gift of being deaf is I have very good eyes to see things.”

“The gift of being deaf is I have very good eyes to see things.”

An 82-year-old Toronto dermatologist who has devoted his life to helping those in need is this year’s recipient of the Royal College Teasdale-Corti Humanitarian Award.

The award acknowledges and celebrates physicians who exemplify altruism and integrity, courage and perseverance in the alleviation of human suffering, and “Dr. Simone is the living embodiment of [these] principles,” says Sam Hanna, MD, medical director at Dermatology on Bloor. A life of sacrifice

Together with his wife, Joan,  Andrew Simone, CM, MD, DSL, FRCPC, decided in 1975 to dedicate his life to helping the poor and vulnerable in Toronto and in the developing world, especially children in need. “We changed our lifestyle and gave away most of our money and possessions.”

In 1980, a priest asked the couple to help Mother Teresa so they started accepting financial gifts from Canadians to send to her charity in India. In 1981, Mother Teresa sent the Simones a personal letter asking them to start sending food to the poor in Africa. “So we learned how to ship food to The Missionaries of Charity in eight countries.”

As this work grew, Mother Teresa encouraged them to start their own charity, which they called Canadian Food for Children. The charitable organization has grown over the years, now shipping five million kilos of food per year with the help of thousands of volunteers and large corporate partners.

“One of our donors is the Egg Farmers of Canada. They give us a half million eggs every year in powdered form. You mix it with water and make a scrambled egg,” says Dr. Simone. “They’ve given us that every year since we started. This is a wonderful protein food for the poor.”

Dermatology for those in need

Jennifer Beecker, MD, FRCPC, of the Canadian Dermatology Association, explains that Dr. Simone didn’t stop there. “Carrying this philanthropic calling further … between 1983 and 2008, [he] contributed his Dermatology services as a self-funded medical volunteer in developing countries such as El Salvador, Haiti, Zambia, Sierra Leone and Peru. The number of people around the world who benefited from his dermatological care over these many trips is astounding.”

With Joan’s support, Dr. Simone now operates a drop-in Dermatology clinic, attached to his Toronto home, six days a week. The goal is to better serve the marginalized by not requiring appointments. His focus is on the early detection of skin cancer. On Saturdays, he sees patients from 4 a.m. to 9 a.m. — the early hours are to help people coming from outside the city avoid heavy traffic.

Dr. Simone defies the odds. He has done all of these things despite only having five per cent of his hearing. He lost his hearing while in medical school at Queen’s University. At the time, he was told he could not become a doctor because he couldn’t hear patients, use a stethoscope or talk on the phone. His dean thought otherwise and advised him to become a skin specialist.

“The gift of being deaf is I have very good eyes to see things,” he says. “Ninety-nine per cent of Dermatology is looking and basically 95 per cent of the time, I know within 10 seconds what the patient has.”

Despite his disability, Dr. Simone finished second in his 1963 graduating class at Queen’s. He was awarded the Medal in Medicine. “Once I knew I lost my hearing I thought, ‘I’m not quitting.’ We had two little boys so I worked as hard as I could.”

The gift of perseverance

Now in his ninth decade, the doctor still does 10K runs and is a competitive swimmer. He has completed four Ironman Triathlons and two Boston Marathons.

“I believe that God gave me all my gifts and I do have the gift of perseverance. I have worked every day for 51 years without ever missing a day from being sick.”

In reflecting on his life of service, Dr. Simone has high praise for the hard work, dedication and sacrifice of his wife, Joan. “We don’t need savings or anything like that. We’re just happy that we have good health and can help the poor.”

Not surprisingly, Dr. Simone does not seek awards and recognition. He and Joan have however, received letters of gratitude from Mother Teresa, and been named to the Order of Canada and awarded the Papal Cross and Honorary Degree Doctor of Sacred Letters.

Dr. Simone and Joan have had a very happy life.  Each summer, they camp for two weeks.  Dr. Simone’s hobby is learning languages: Spanish, French, Italian, Creole (Haiti) and German. 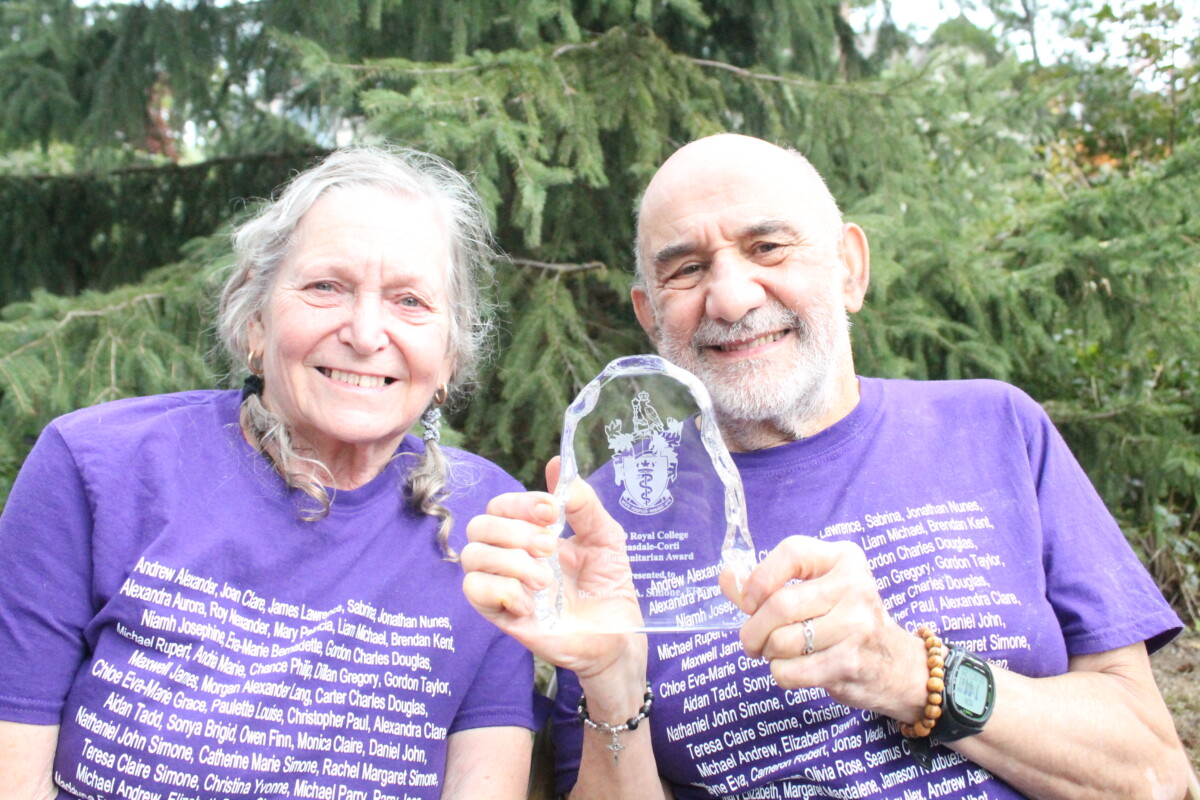 Dr. Simone and his wife, Joan, celebrating his achievement and their 60th wedding anniversary (Submitted photo)

Anonymous Anonymous | October 26, 2022
What a treasure of a human being Dr. Simone is. He is a credit to his profession and to the human race. I needed to see a dermatologist but could not get an appointment with my family doctor for a referral I looked up dermatologists online and everyone required a referral and had huge waiting lists. I was very depressed dealing with my skin condition on my own (unsuccessfully I might add) with over the counter medications. So depressed in fact that I did not want to leave my apartment or be seen in social situations due to very persistent acne and rosacea. I found Dr. Simone online, showed up at his office the next day and was seen within 45 minutes. He diagnosed my medical issue, prescribed me oral antibiotics and topical cream and I a on my way to having a clear complexion for the first time in my life (and I am a 64 year old man). Dr. Simone has given me hope when I thought there was none. My skin condition is improving, my confidence is returning, I don't feel embarrassed about going out and being seen in public. He is a God send and I cannot express my gratitude for him being so accommodating and easy to see for an appointment. I dot know what I would have done or where I would be today without Dr. Simone's help. He truly is a saint. Thank you Dr. Simone for being there for me and so many others. Today is a great day thanks to the good doctor.
Reply

Francisco Ruffolo | September 29, 2022
Dr. Simone and his wife Joan are considered Saints by many people in the Toronto area. I Too was his patient when I lived in Toronto. He diagnosed my Psoriasis condition in less the 10 seconds.
Reply

jay dee | December 20, 2020
I am honored to be a patient of Dr. Simone. He and his wife are Canada's treasures, in fact they are part of the World's enlighted who allow the rest of us to still have hope in humanity. May God grant him and his wife eternal life. J.D.
Reply

Erika Alvarenga | October 23, 2020
Dear Doctor Simone, I can’t say that I am surprise with this award, you are an amazing doctor, and on top of that an amazing citizen and an example of Christian. You save my mom’s life by diagnosing early skin cancer, you saved my nephew that lives in Australia with serious skin problem, not counting several of my friends that you cure. We have a doctor student at home, and I wish he can take care of his future patiences with so much care and love the same way you do. We are blessed to have you in our community. God bless you and your entire family! We love you!
Reply

Wolodymyr (Walter) Medwidsky | September 13, 2020
Dear Dr. Simone, I am thrilled that you received the 2020 Royal College Teasdale Humanitarian Award. There is no doubt that this recognition is long overdue. I had the pleasure of working with you in the early 1970's at the Toronto Western Hospital Dermatology Clinic. Since then we have been in touch from time to time discussing your many interesting patients. You and your wife have worked tirelessly in the health related field and have achieved much success in all your humanitarian endeavors.You are truly deserved of the many accolades from your colleagues as well as from those whose lives you have touched. I am certain your work on earth will be rewarded in heaven. Best wishes and the warmest regards, Walter Medwidsky
Reply

Brian Finamore | September 4, 2020
A fantastic story about Dr. Andrew Simone. He has been my doctor for several years. When I read things like this it gives me hope. There are many good people in the world. We don't always get to hear about them. Thank you for sharing.
Reply

Clara Nasello | September 1, 2020
Dear Doctor Simone, I have heard about your good work from my sister Rose Simone who was married to Joe Simone. I am very moved by your story. Thank you and Joan for all your goodness and kindness. Certainly the world is a better place because of the both of you. Clara Nasello CND
Reply

Helen Brown | August 28, 2020
Dear Dr. Simone, I have a wonderful memory of you. I worked at a hospital as an ACC and I saw a notice you were going to give a lecture about Allergies to the medical staff. When you made your rounds that day I asked you if I could attend because my youngest child suffered with extreme allergies. You asked me some questions and said yes. Some of the medical staff did a double take when a ward clerk appeared with notebook in hand. Your lecture was superb. I learned so much and was able to help my son and others with the advice you so generously gave. The next time we met you asked me what I learned and if I had any questions. Thank you for having confidence in me. That was over forty years ago. Wishing you wellness. Helen Brown
Reply