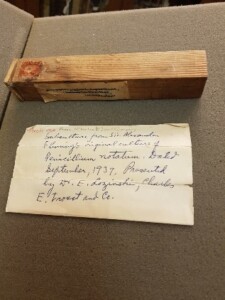 On June 6, 1944, Canadian soldiers debarked onto the beaches of Normandy to take part in the strategically-planned Allied invasion of German-occupied France now known as “D-Day.” They carried a secret weapon hereto unknown to their enemies. Developed in Britain and the United States, after the accidental discovery of antibacterial substances produced by Penicillium mould by Dr. Alexander Fleming in 1928, and through the pioneering work of Dr. Howard Florey and colleagues in 1941, the “wonder drug” penicillin had been isolated, mass produced and distributed to Allied troops. Penicillin was used for prevention and treatment of wound infections, as well as to treat pneumonia and sexually transmitted diseases, and was more effective than the sulfonamide compounds previously available.

Canadian research on penicillin began soon after Dr. Florey’s visit to North America in 1941, under the supervision of Dr. Philip Greey, assisted by Dr. Alice Gray at the Department of Pathology and Bacteriology at the University of Toronto. Extraction of the antibiotic from mould was improved through the work of Dr. C. C. Lucas, then Dr. S. F. MacDonald in 1942 at the Banting and Best Department of Medical Research. In 1943, in a coordinated effort supported by the Canadian Government, the University expanded its Connaught Medical Research Laboratories by purchasing the “Spadina Building,” which then began producing larger quantities of penicillin. Long involved in the development of antitoxin sera and vaccines since its inception in 1917 under the auspices of Dr. John G. FitzGerald, then after his death in 1940 in the care of Dr. R. D. Defries, Connaught Laboratories and its production of penicillin played an instrumental role in the Canadian war effort, fitting soldiers with the life-saving medication that has become colloquially synonymous with Allied victory.