Clinician-researcher aims to bring three new therapies to the NICU 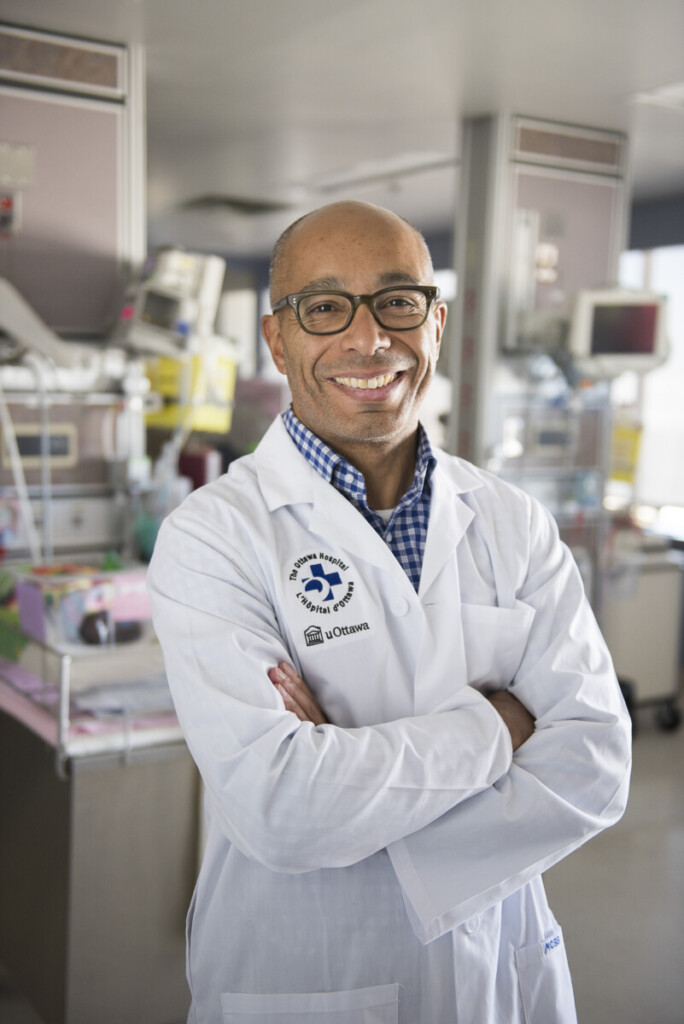 Originally from France, Dr. Thébaud moved to Canada permanently when he discovered the research infrastructure here was a good fit for his career goals. “For clinician scientists, Canada provides protected time to do research, which isn’t available in France,” he said. “This has enabled me to make some exciting progress.”

Exciting indeed. Since the early 2000s, Dr. Thébaud has worked with notable success to improve lung and organ health in pre-term infants — first as a post-doctoral fellow at the University of Alberta, then as a clinician scientist exploring the repair potential of stem cells and other therapies for neonatal lung diseases.

Among many accolades, he won the “Best in Current Canadian Child Health Research” Sanofi Pasteur Research Award in 2007 and a “Rising Star in Perinatal Research” award from the Canadian Institutes of Health Research in 2008. He was a Canada Research Chair from 2005 to 2012 and currently holds the University of Ottawa Partnership Research Chair in Regenerative Medicine. Dr. Thébaud has written 120 peer-reviewed articles and delivered more than 80 lectures in just the past five years.

Today, he is a neonatologist at The Ottawa Hospital and the Children’s Hospital of Eastern Ontario, a senior scientist at The Ottawa Hospital Research Institute, and a professor at the University of Ottawa. Intensely curious and intellectual by nature, Dr. Thébaud narrowed his research goals in 2004 following a tough conversation. “I had to tell a grieving mother that, despite exciting developments in the lab for regenerating damaged lungs, I had no treatment to save the life of her pre-term infant.”

The mother asked Dr. Thébaud if there was anything he could do for her baby that day. There wasn’t. “It was a frustrating experience and a game-changer for me,” said Dr. Thébaud. He decided that, no matter how interesting and intellectually exciting, he would not work on a problem in the lab unless it had potential to reach the clinical environment within five to 10 years. “To me, if research doesn’t have a clinical impact, it doesn’t really matter.”

“Babies born too early can develop a number of problems, including bronchopulmonary dysplasia, which occurs when the lungs are not well enough developed,” said Dr. Thébaud. This damage can have lifelong consequences, including impaired lung function, asthma, premature aging of the lungs and pulmonary hypertension.

In animal studies, MSCs have been injected to repair damaged organs, and the procedure has shown great promise. Dr. Thébaud recently began a phase 1 clinical trial for MSC on pre-term infants.

Studies on mice have shown this gene therapy can significantly increase lifespan. Without the gene therapy, surfactant protein B deficient mice live from three to five days; with it, they live 200 days. “The equivalent in humans would be from a few weeks without to about 20 years of life with the gene therapy,” said Dr. Thébaud. “We can’t be certain about the one-to-one correlation with mice, but the studies have been promising.”

While many questions remain about the gene therapy’s efficacy over the long term, Dr. Thébaud expects to develop a treatment ready to test in humans within two years.

Although most of his research focuses on infants, Dr. Thébaud said it all has potential applicability to adults. As one example, he and his adult intensive care colleagues received approval from Health Canada to use MSCs in clinical trials to treat patients who develop acute respiratory distress syndrome, one of the many potential side-effects of COVID-19.

“Some COVID-19 patients experience a hyperinflammatory response in the lungs, and MSCs act as immunomodulatory cells that dampen the inflammation,” said Dr Thébaud. The readily availability of MSC enabled to rapidly initiate a clinical trial that started in September 2020.

Dr. Thébaud’s goals to bring his three most promising lines of research to the clinical environment would be a major leap forward for neonatal care — which he says has seen only two breakthrough therapies in the past 30 years. “If we can bring our new therapies to the NICU, we can substantially improve the outcome of pre-term infants. That would be my dream, and I think we can achieve it.”