Just two weeks into the COVID-19 pandemic – and well before residents in Canadian care homes began dying of the virus in large numbers – Samir Sinha, MD, FRCPC, became a magnet for criticism when he told Globe and Mail health reporter André Picard, “If my mom was in long-term care, I’d pull her out now.”

Surely, things couldn’t be that bad, some Canadian critics said. Surely, we have safeguards protecting frail seniors, they argued. 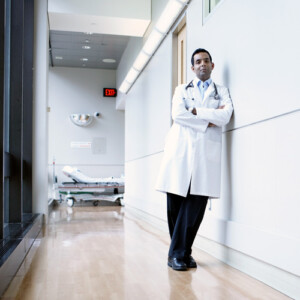 While he takes no pleasure in being right, Dr. Sinha had for years been trying to warn the public and policymakers that fissures in our long-term care system could be blown wide open by a novel pathogen like the virus that causes COVID-19.

Dr. Sinha is director of geriatrics at Toronto’s Mount Sinai Hospital and University Health Network Hospitals, director of health policy research at the National Institute of Aging (Ryerson) and expert lead of Ontario’s Seniors Strategy. He was attending medical school at Western when he began honing his advocacy for vulnerable people.

Caring for people at the highest risk of dying and coping with fallout from his public critiques of the system has made life during COVID-19 “some of the most professionally and personally demanding months of my life.

“Prior to the pandemic, we had 430,000 Canadians with unmet health care needs, and 40,000 on nursing home wait lists across the country,” he explained. “Going into this, we already had an eldercare crisis on our hands. COVID-19 exposed those systemic vulnerabilities that a lot of us were choosing to ignore, or wanting to believe didn’t really exist.”

And it’s not just the sheer numbers that weigh on Dr. Sinha and his colleagues. “I don’t think there’s any Canadian who’s not been touched by a loved one, or (doesn’t know) someone who died in a home care setting. Behind those numbers are thousands of people who didn’t have a good death, and that’s unfair.”

But while many of us are now familiar with some of the cracks that contributed to the collapse of the long-term care systems in Ontario and Quebec – poor infection control measures, under-staffing, employees whose part-time hours and poor pay led them to work in more than one care facility – Dr. Sinha says protecting our seniors from future pandemics requires a fundamental shift.

The first step? Correcting the underfunding that lingers from the failure to include long-term care in medicare’s safety net 50 years ago. At the time, the oversight was understandable, since the average Canadian was 27 with a lifespan in the mid-60s. But now Canada spends one third less on home care and nursing home care as a proportion of its GDP than the average for OECD countries.

“If the prime minister called me tomorrow and asked ‘What would you do?’ I’d say, ‘Let’s just start by being average, and boost funding for provision of long-term care by 30 per cent,’” Sinha says. “We’ve seen what being below average gets us – the dubious distinction of being the international leader of deaths in these settings.”

And that’s just the start of Dr. Sinha’s recommendations.

“Number two, I would reorient how we spend our money,” said Dr. Sinha. “We focus 87 per cent of our long-term care spending on institutionalizing people, but less than seven per cent of our older population is actually living in congregate care settings like nursing or retirement homes. And yet a large proportion of these facilities are outdated and cramped, with two or three residents to a room — ideal conditions for infections like COVID-19 to spread. In Ontario, for example, we’ve got 79,000 publicly funded nursing home beds, and 30,000 are in need of an upgrade.”

Shifting spending towards helping more older Canadians remain in their homes could go a long way towards solving Canada’s long-term care crisis, he said. “In Denmark, by investing more aggressively in home and community care, not only did they avoid building any new nursing homes or nursing home beds for a 20-year period, they also saw the closure of thousands of hospital beds.”

Until then, however, Dr. Sinha continues his advocacy on behalf of vulnerable people as he uses the lessons in leadership he learned during his days at Western.

He has helped create a transparent record of Canada’s COVID-19 deaths in long-term care in the form of the National Institute on Aging’s real-time online tracker.

He continues to push for long-term care reform.

And more Canadians are starting to listen to the message, however painful it might be.

“Our opportunity as health care leaders and as people who have borne witness to this is to never let it happen again, and to learn from international experience how we can better support seniors to stay healthy and independent as long as possible.”

This article was originally published in the fall 2020 issue of the Western Alumni Gazette.